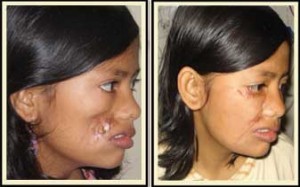 Titi Hariani is a 13 years old girl who was born in 1995, in Lombok. She was referred to Yayasan Senyum Bali by a Yayasan outreach worker in Lombok who found her in her village in the north of the Island. Titi-Hariani was very undernourished when she was found and this was the first task for Yayasan Senyum Bali when she came to the Yayasan Senyum "Smile House' in Denpasar in November 2008 When she was at the Smile House she attended several clinics at Sanglah Hospital and was also examined by Professor David David from the Australian Cranio Facial Unit in Adelaide. Dr David diagnosed Titi-Hariani as suffering from a right tessier cleft and also a large opening on the right cheek. Dr David suggested an operation for Titi-Hariani when her malnutrition was under control.In January 2008 Titi-Hariani again returned to the Yayasan Senyum Bali "Smile House" and attended several clinics at Sanglah Hospital, also during this time she had several teeth removed and had extensive teeth cleaning and dentistry work done.

At the end of January she was admitted to Darma Yadnya Hospital, a private hospital in Denpasar, to have facial surgery by one of Bali's senior plastic surgeons. This operation was very successful and after a short recovery period, Titi-Hariani was discharged to the Smile House for a few days before returning to her village in Lombok.

Komang Adi was born in 1997 in a small village in the west of Lombok, an island which lies to the east of Bali. He is now eleven years old and attends school in Lombok where he is in the final year of elementary (Primary). In 2007 Komang ...

A BENEFICIARY SPEAKS          My name is Lydia Podu Pasi. I was born in February 1977 in the outskirts of Kabalidana village, Wanokanoa–Waymangura District, Southwest Sumba, ...

This is Adiati from Maumere NTT, she  is 38 years old suffer from Ameloblastoma. She was referred to us by our friend from Australia who visited Maumere a few months ago. When we got information about her, we contacted her ...

Wayan Wirantina is the first child on her family, born on March 01st, 2016 in Lombok. She had a twin sister but unfortunately she passed away after 1 month old. Her mother was so sad and tried to be strong ...

Regilianus Dasno, known as Fio, is an attractive little boy from Flores, born on September 7th, 2011. He is now 4 years old. He came to Smile House for the first time to be seen by Prof. David J David in DD Clinic November ... 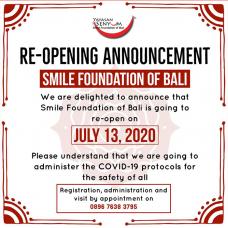